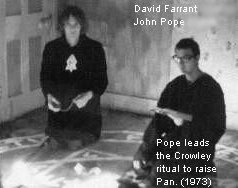 John Pope, once the head of the United Temples of Satan, and a self-styled successor of Aleister Crowley, supports ritual human sacrifice, but settles for animal sacrifice. David Farrant, as far back as 1973, publicly supported animal sacrifice, as revealed in the Hornsey Journal, 28 September 1973 and Hornsey Journal, 31 August 1973. In the latter he stated when interviewed by Roger Simpson: “Hundreds of years ago a naked virgin would have been sacrificed, but obviously we couldn’t do that now so we had to have an animal for the important ritual.” Often described in the media as Farrant's "lieutenant," Pope was the most active participant in his mentor's skullduggery and most prominent black magician attached to Farrant until the appearance of Jean-Paul Bourre seven years later. John Pope nevetheless remained an outspoken supporter and friend of David Farrant who, in the summer of 1974, was convicted of malicious damage in Highgate Cemetery by inscribing black magic symbols on the floor of a mausoleum; offering indignities to remains of the dead via black magic rites in Highgate Cemetery where photographs were taken of a naked female accomplice amidst tombs; threatening police witnesses in a separate case where his black magic associate was subsequently found guilty of indecent sexual assault on a young boy bearing the surname Blackwell. Pope insisted at the time it was "magick" (spelt magick à la Crowley who specialised in "sex magick"). 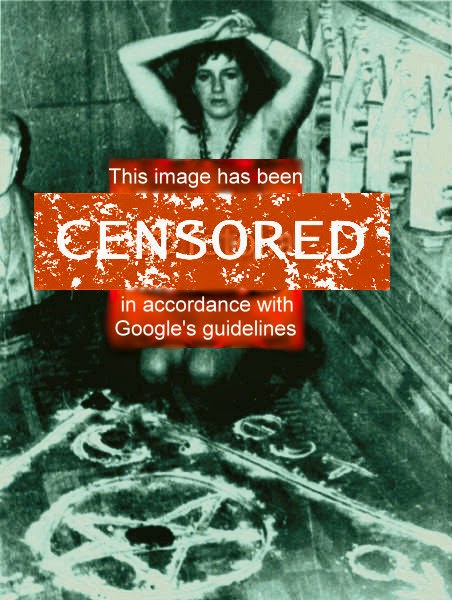 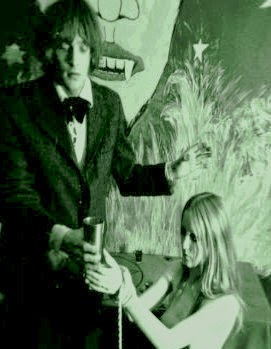 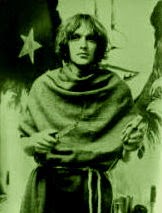 David Farrant's associate, John Pope, always described himself as a “master of the black arts.” Farrant was convicted of theft of items from Barnet Hospital where the offender worked very briefly as a porter upon his release from Brixton Prison where he had been on remand in August 1970 following his arrest in Highgate Cemetery by police searching for black magic devotees. He was also found guilty of indecency in a churchyard two years later, and was further convicted in 1974 of possession of a handgun and ammunition kept at his address, which contained a black magic altar, complete with black candles, beneath the mural of a diabolical vampire's face that had featured in a variety of newspapers, not least full front page coverage in the Hornsey Journal, 28 September 1973. 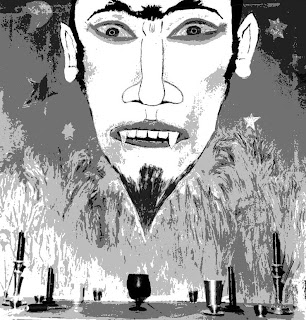 David Farrant received a prison sentence of four years and eight months. Two libel suits brought by him resulted in the News of the World (who had quoted his girlfriend's claims that his publicity-seeking antics were compensation for him being a failure as a lover) failing to produce their principal defence witness due to Farrant making sure she remained in her native France, and him losing against the Daily Express (who had accused him of being a black magician and also of being insane) where £20,000 court costs were awarded against him. He had also brought libel suits against Canon Pierce Higgins and Dennis Wheatley (who sadly died prior to the case). These suits failed. It was now safe to describe Farrant as a black magician and mentally unbalanced. In the News of the World action, which he won on a technicality, he was awarded the derisory sum of £50 and ordered to pay costs. The newspaper’s star witness who failed to appear for their defence was Martine de Sacy, the ex-girlfriend who had been identified as the naked female in the infamous “nude rituals trial” in 1974. He persuaded her not to appear at court. This caused the newspaper to lose its star witness. 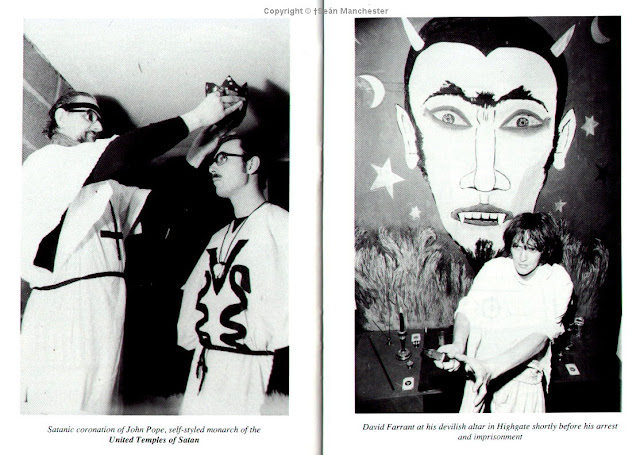 John Pope prepares for a necromantic ritual in a London graveyard: 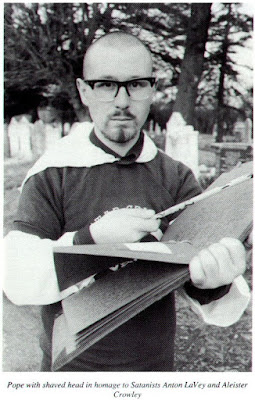 “For the highest spiritual working one must accordingly choose that victim which contains the greatest and purest force. A male child of perfect innocence and high intelligence is the most satisfactory and suitable victim.” 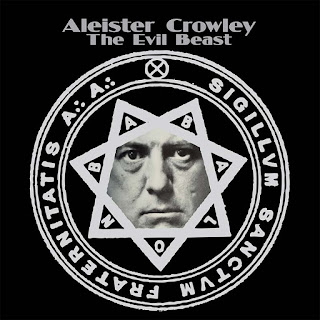 “With the cross of jesus trampled on the floor …

Christians necks our footstool, Heaven itself Our throne.”

Reproduced below is Pope’s description of himself, in his own handwriting and signed, that was sent to someone he perceived to be an hereditary lord. Pope was claiming to be a baronet and called himself “Sir” at the time; mistakenly confusing his self-styled “knighthood” with the status of hereditary lords: 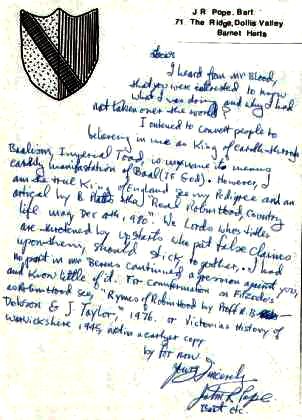 The letter is signed “John R Pope” (his birth-name being John Russell Pope). This he changed by deed poll to “John Pope-de-Locklsey,” soon after the above was written, in honour of the legendary figure of Robin Hood from whom he claims direct descent. The above letter (with its unamended spelling, grammar and syntax) reads:

I heard from Mr Blood, that you were interested to know what I was doing and why I had not taken over the world?

I intend to convert people to believing in me as King of earth through Baalism, Imperial Toad, is my name its means earthly manifestation of Baal (IE God). However, I am the true King of England see my Pedigree and an article by B. Platts the “Real Robin Hood, Country life mag, Dec 4th 1980.” We Lords who’s titles are threatened by upstarts who put false claims upon them, should stick together. I had no part in Mr Berens continued aggression against you, and know little of it. For confermation on Fitzodo’s as Robin Hood see, “Rymes of Robin Hood by Proff R. B. Dobson E J. Taylor,” 1976. or Victorias History of Warwickshire 1945, not in a earlier copy. 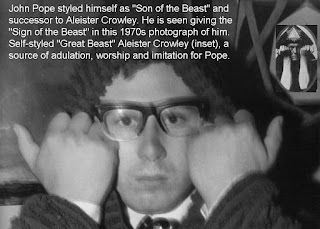 Revelations of an even more extravagant kind, if that can possibly be imagined, were published in the best-selling sequel to The Holy Blood and The Holy Grail. Pope wrote at least twice to the authors who apparently thought that they were receiving items from two separate people. Many other parties were also receiving identical material from him at this time; so it can safely be confirmed that both missives originate with Pope. Copies sent to independent sources are now in our possession. This is what was published by the three authors, Michael Baigent, Richard Leigh and Henry Lincoln, on page 282 of The Messianic Legacy (Corgi, 1987):

At least a dozen self-proclaimed Messiahs hastened to contact us, for reasons which none of them satisfactorily clarified. … [Pope] sent us a photograph of himself apparently suspended in mid-air and clinging to a football post ~ “to keep from drifting away.” [Pope] enclosed a genealogy intended to establish his descent not only from Jesus, but from Robin Hood as well. “I’m the person you’re looking for.” …. Still others, engaged in the perennial game of “Spot the Antichrist,” pronounced us to be his avatar(s). 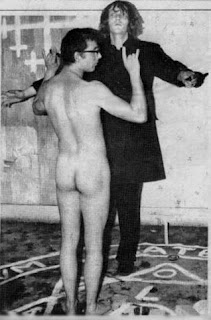 Pope with Farrant in December 1973.

And this is one of the typed letters (again, with original grammar etc) sent by Pope to the authors of The Messianic Legacy, accompanied by the aforementioned two photographs of him swinging on a soccer goal post:

It has come to my notice that Richard Leigh’s book “Holy Blood Holy Grail” has certain pedigree of the descendants of Jesus Christ, the pedigree’s end with Eustace 1st Count of Boulogne, who was the brother to Odo, the ancestor of our Lord Imperial Toad John Pope. As proof his is the Messiah which Jewish law states must be of the Holy Grail blood brought to Europe after the crucifixion. By Jesus’s wife Mary Magdalene. Mr Pope has had this photo taken of himself levitating thus showing he can perform miracles. Mr Pope is holding on to the poll for support, as he may if he lets go fly away.

Pope also provides (to those who want them and equally those who do not) copies, dated 8th June 1981, of his “degrees in the Masonic lodge of the Ordo Templi Orientis” which apparently entitles him to use each and all of some thirty titles, including: “0 degree Minerval, 1st degree Man, 2nd degree Magician, 3rd degree Master Magician, 4th degree Lodge of Perfection and Holy Royal Arch of Enoch also known by the title of Perfect Magician” etc. This curious document is signed: “Baphomet XI degree OTO.” 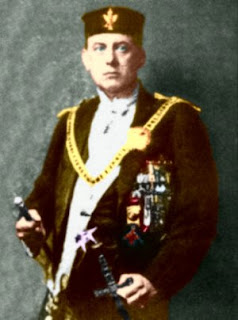 Together with William Antony Binding, Pope engaged in the Transworld Temple of Ishtar, having previously been appointed head of the United Temples of Satan to which Binding also belonged. No longer in Barnet, Pope now resides at Binding’s East London flat. Recorded interviews confirm Pope’s use of appellations such as “Master Therion,” “Imperial Toad,” “False Prophet” and “Son of the Beast” (the “Great Beast” being Aleister Crowley). However, Pope makes clear that he is the “spiritual son” of Crowley; unlike his descent from Robin Hood, Jesus Christ, and possibly Jack the Ripper, which, according to Pope, is genealogical. John Pope joined forces with David Farrant in 1973. Together they attempted to raise demons, including Pan, using Crowleyite rituals. Farrant’s own behaviour in the occult hemisphere would land him in prison by the end of that year. When Farrant was released from jail in late 1976, a certain degree of rivalry had generated between him and Pope, but within no time they were collaborating together again. Pope admits (during an interview recorded on 18 October 1987) that Farrant provided the formula for a curse that allegedly destroyed someone’s marriage, career and health. Thirteen years earlier, the rock musician Graham Bond fell beneath the wheels of a train. Some months previously, Bond had been invited to “exorcise” another rock personality’s home. Long John Baldry of London’s Muswell Hill had been receiving voodoo dolls and death curses from Farrant whose chosen emissary was Pope. When Baldry turned up uninvited at Farrant’s flat, he found only Pope. Farrant was either out, or in hiding. Pope nevertheless delivered in person a clay effigy in a miniature coffin to Baldry’s home. When the rock singer brought in his friend for help, Pope claims to have put a curse on Graham Bond which resulted in his death. This is confirmed by Pope in the same recorded interview of 1987. It is generally believed that Bond either committed suicide, or possibly met with an accident. 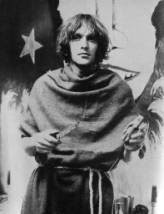 Farrant holding one of the dolls.

Pope did once marry. He later sent details about the failure of his marriage and his subsequent divorce to Farrant, who published such autobiographical comments in the sixth and final issue of an amateurish newsletter in 2000, which thankfully thereafter sank without trace. In Farrant’s home-produced newsletter, Pope revealed:

I was married in 1987, wife Natasha, aged 19. We are divorced because of my three affairs. I have been intimate with many women over the years. I have had many girlfriends and close ties. Some are on public record. I don’t chat girls up, they chat me up.

Elsewhere in the same publication, Pope devotes an entire page to his version of the Blackwell case. Pope then ends his statement with words that do not balk at describing his unashamed satanic proclivity and notorious past:

When I had my satanic empire, I was king. I had any woman I wanted, drugs, power. … I became famous, made some money … Now it’s all gone.